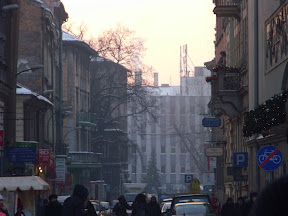 Poland is a place of many amazing things, good, bad, and ugly. There’s not a shortage of water or food, nor is there an overwhelming need to help in the orphanages, and it’s not a place struggling with war. But it is a nation of 38 million people, 38 million people who, for the most part, do not hear, nor get the opportunity, to know the saving power and knowledge of Jesus.

Poland’s history is full of tragedy, from wars, near genocide, the Holocaust, to communism and the psychological effects of each. With the recent crash of the Polish delegation heading to commemorate the Katyn massacre, we are reminded of the catastrophes which have spotted Poland’s history, when you begin to study each of the events it can become overwhelming. The consequence of such history has had a great effect on Polish society, underlining many of the characteristics which make it hard for Poles to encounter the living God.

When you begin thinking about the effects of living in such a dynamic society, you can imagine the effect it can have on individuals. In our experiences (outside the wonderful personal friendships we have made) we have witnessed a people who are hard to build trust with, who are generally negative about life, and are afraid of being controlled. Even though we have personally witnessed Church splits, church abuse, and seen the damage caused when other foreign Christians attempt to setup Church “the way it ought to be”, we know greater things are yet to come. Because we do not seek to tell people what a relationship with Jesus needs to look like we stray away from concrete numbers (which are very hard to come by as it is). Instead we seek to love people in the power of the Holy Spirit, into a different kind of relationship with Christ.  Estimates of protestant, evangelical, charismatic Christians range from 150,00 to 320,00 – or 0.003% to 0.008% of the population.

The wonderfully good news, comes from our own personal connections with people in Poland. While there are big hurdles to overcome, and many things to learn, we believe God has a calling on the people of Poland. A calling not to unlike what the American church has been to the rest of the world, not in the way we may think (with money, resources etc), but in the effect of being Jesus to the world.  Of the Polish Christians we know, we see a light which is striving to turn a nation upside, a group of people ready to change not just the nation of Poland, but ready to change Europe and beyond. To be effective both socially and spiritually. The workers are little, it’s estimated there is one born-again Christian work/group/church (both Catholic and non-Catholic) per every 250,000  people, and the harvest is great.

We know reaching Poland requires believing in doing something bigger than ourselves, and picturing that calling with each step. Believing it is just the beginning, walking it out with effect, is why we are doing what we’re doing now. We could write so much more, and we will.

2 thoughts on “The good, the bad, and the ugly”